On June 24-25, 2019, a delegation of four judges and other high level officials from or associated with law enforcement, criminal defense and prosecution from the state of Mexico visited the DC Drug Court program.  In addition to the judges and other officials, the delegation also included two representatives from the U.S. Department of State, three CICAD (the Inter-American Drug Abuse Control Commission) staff members, and two interpreters. During the visit our Mexican guests learned about different aspects of the DC Drug Court. The judges came from Toluca, the state capital of the State of Mexico. The State of Mexico is one of just five Mexican states (out of 32 totals) that have drug courts. Drug court programs are still relatively new in Mexico. As of February 2017, there were just 22 drug court programs.  However, the government of Mexico has announced plans to expand existing programs and create pilot Drug Courts in other Mexican states.  Its central location, the State of Mexico has emerged as a leader in training judicial officials from across Mexico on the Drug Court model. For this reason, the delegation was interested in gaining as much knowledge as they could about the very successful DC Drug Court program.  They hope to use that information to continue the development of their own drug court programs.

Over the two days visit, the Mexican delegation was able to view and discuss typical drug court cases, presided over by Judge Wendell P. Gardner, Jr. as well as tour the drug testing lab, arraignment court, and cell blocks.  The team of drug court facilitators for the training consisted of members of the Pretrial Services Agency, DC United States Attorney’s Office, DC Public Defender Service, and the Office of DC Attorney General.  The visitors were informed about the eligibility requirements for drug court and its voluntary enrollment, as well as the rewards for good behavior and sanctions for bad behavior.

The Mexican delegation also heard from two former drug court graduates who stated that their nearly decade of sobriety is due to the positive impact of the DC Drug Court.  The two graduates shared their different experiences in the program and how they were able to graduate successfully after their time in the program.  Both spoke about how the program awoken them to the need to change their mindsets in order to stop the unhealthy way they were living each day.  This state of mind contributed to their troubles with the law. They noted that the Drug Court program was able to reveal their need to escape the cycle of substance abuse that was holding them back and hurting them and their loved ones. The graduates' words illustrated the profound effect that the DC Drug Court can have on its participants.  Their remarks demonstrated that DC Drug Court did not just help them finish the program, but that it also helped them sustain the progress that each participant had made even after they graduated from the program.

The visit of the judges and officials from Mexico was packed with information and discussions about DC Superior Court's Drug Court program.  The goals of this visit was to inform and perhaps inspire our visitors via knowledge about our Drug Court program and to help them build model programs in Mexico, tailored to the specific needs of their courts and communities.

For more information on the effectiveness of Drug Courts, click here: https://www.nadcp.org/treatment-courts-work/

The delegation with Judge Gardner in the courtroom 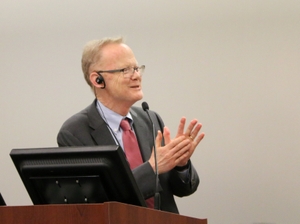 Teen arrested in bomb threat at D.C. school during visit by VP’s husband