On February 28, Judges Kenia Seoane López, Rupa Puttagunta, Ebony M. Scott, Sean C. Staples, and Donald Walker Tunnage became the newest members of the Superior Court of the District of Columbia. Chief Judge Anita Josey-Herring, who administered the oath, said she was thrilled with the five additions to the court, which has been dealing with vacancies for years.

“I feel like President Biden moved quickly on this. Obviously, the administration has a number of other federal appointments and other federal appointees to get through the Senate. And so we are grateful to the president for understanding the needs of the citizens of the District of Columbia and of the people who use our court to know that their cases can be resolved effectively and efficiently because we are properly staffed.” 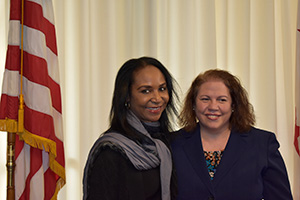 Judge Seoane López first joined the court in 2012 when she was appointed magistrate judge. Previously, she was a bilingual attorney negotiator in the court’s Domestic Violence Division. A graduate of the University of Wisconsin Law School, Seoane López worked as a law clerk at the Superior Courts of Massachusetts and the District of Columbia, and later joined the D.C. Office of the Attorney General’s Child Support Services Division as assistant attorney general. Seoane López was president of the Hispanic Bar Association of the District of Columbia from 2010 to 2011.

When asked about her transition to associate judge, Seoane López said she is expecting a heavy workload. “The pandemic has accelerated that. So, we need to figure out ways to address it in working with our court partners,” she said. 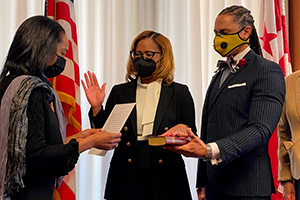 Before her appointment as associate judge, Scott was a magistrate judge on the Superior Court. Previously, she was deputy director in the D.C. Mayor’s Office of Legal Counsel. A graduate of American University Washington College of Law, Judge Scott began her career as a civil litigator before joining the D.C. Office of the Attorney General’s Housing and Community Justice Section as an assistant attorney general, and then the D.C. Office of Human Rights as general counsel. 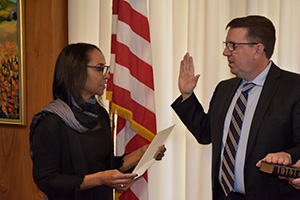 Judge Staples was a magistrate judge on the Superior Court from 2013 to 2021, assigned to the Criminal Division, Domestic Violence Division, and Family Court. Prior to his service on the bench, Staples was the Guardian ad Litem Program director at Children’s Law Center, where he oversaw the work of 45 attorneys and support staff in the representation of hundreds of children in the District of Columbia’s abuse and neglect system. He graduated from the Catholic University of America’s Columbus School of Law.

“A lot of people don’t realize that magistrate judges do a lot of the same work as associate judges,” Staples said. “So, it’s not that much of a mental shift. My biggest concern is that we have a great magistrate suite of people. We have a very big family. Now, I’m sort of isolated in my own chambers. So, that’s going to be the adjustment — having my own group of people and staff.” 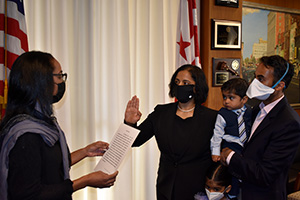 Judge Puttagunta previously served as an administrative law judge at the D.C. Rental Housing Commission, appointed in 2018 by Mayor Muriel Bowser. Five years prior to accepting that position, Puttagunta started her own law firm, Ranga Law, where she represented hundreds of indigent criminal defendants in trial and on appeal. Puttagunta also served on the Criminal Justice Act panels of both the D.C. Court of Appeals and D.C. Superior Court. After graduation from Ohio State University’s Moritz College of Law, Puttagunta clerked for Judge William M. Jackson, then-presiding judge of Family Court at D.C. Superior Court, and then for the senior judges at the D.C. Court of Appeals. 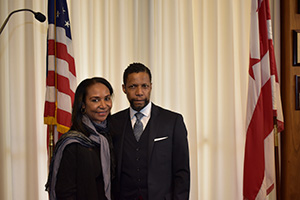 Prior to his appointment to the court, Judge Tunnage served as an attorney in the U.S. Department of Justice’s (DOJ) Civil Rights Division. He litigated lawsuits in federal district courts to enforce the Fair Housing Act and Title II (Public Accommodations) and Title VII of the Civil Rights Act. Before working for DOJ, Tunnage was an assistant state public defender in Miami. A graduate of Duke University School of Law, Tunnage also earned a master’s degree in public policy from the Harvard Kennedy School of Government.

Judge Tunnage said he is looking forward to being helpful to the District’s judicial system. “By helpful, I mean helping the court with the backload of cases and the people who appear before the court,” he said. “So, with that, I think I need to learn a lot so that I provide the most help.”

Even with the addition of the five new associate judges, the Superior Court is still 12 judges short to operate at full capacity (62 judges). “I am aware of at least three judges who said that they will be leaving between now and the summer. One will be leaving at the end of March. So, we are still in a very difficult situation,” Chief Judge Josey-Herring said. “We are hopeful that some of our nominees that are at the Senate now will get through the process so that we can actually start really getting back to full strength.”

Arrest Made in a Homicide: 5000 Block of Nannie Helen Burroughs Avenue, Northeast

Prepare to Record and Share: The DC Courts Set to Announce a Innovation Partnership Connected to an Expanded Eviction Diversion Initiative

Sign up for periodic updates on the DC Courts