On Thursday, October 3rd, the educational nonprofit LearningPlunge held a tournament for students from seven local public elementary schools in the DC Historic Courthouse. The tournament served as the launch for the latest LearningPlunge initiative: HistoryPlunge. The tournament involved students from Murch, Stoddert, Hendley, Ludlow-Taylor, Bruce Monroe, Stanton, and Eaton elementary schools competing with one another by playing a variety of games. For all the games, the children used the HistoryPlunge cards through which they learn US history and civics. 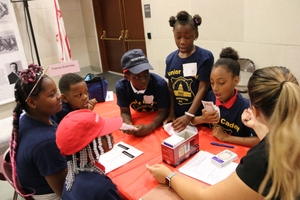 The day began with the students getting a tour of the Historic Courthouse as well as an overview of DC Court of Appeals (DCCA) functions. DCCA Chief Judge Anna Blackburne Rigsby then welcomed the students and asked them a few non-tournament questions. She asked the students what qualities they believed would make a good judge; answers included traits such as honesty, integrity, and humility. The Chief Judge then asked them what qualities make a good student. The answers to the two questions were largely the same, Chief Judge Rigsby pointed out to the students, encouraging them academically and professionally. Following this, the Chief Judge spoke about all the people in a courthouse that make a court system run, who work behind the scenes, such as the executive officer, law clerks, courtroom clerks and everyone working with the public to enhance access to justice. Following this, she introduced Alan Fishel, founder of LearningPlunge, and the tournament began. 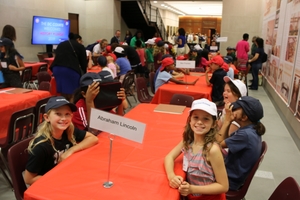 The students were divided into 24 teams and the teams competed in a series of different games. After the first few rounds, taking the students through all the games, they were given the chance to choose their favorite games to play for the following rounds. Since this served as the launch to HistoryPlunge, it was also used to gauge which games the students are better at, and which ones they enjoy the most, so that the HistoryPlunge organizers could make any needed modifications. 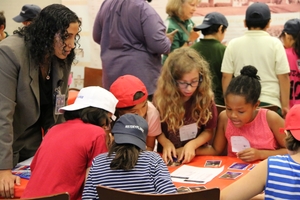 At the end of the day, there were two first place awards and two second place awards. LearningPlunge’s goal is to encourage more than just winning the educational games, so in addition to the four placement awards, there were also awards given to students who displayed exceptional sportsmanship. The full list of award winners can be found below. Alan thanked the DC Courts for hosting the HistoryPlunge launch in the DC Court of Appeals' Historic Courthouse. "When playing in a tournament centered around history and civics, there is no place more fitting than this nearly 200 year old building," he said. 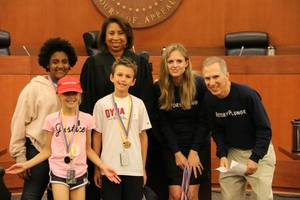 While HistoryPlunge is a new concept, LearningPlunge is an established and successful local nonprofit, launched many years ago with GeoPlunge which has the goal of improving elementary and middle school age children’s understanding of American geography. The idea was to make a game that taught geography that would be fun for every student, and play on more strengths than just memorization. “There are plenty of trivia games out there that work for kids who like trivia, but what about students whose strengths lie elsewhere?” Alan explained. With a game that could be enjoyed by all, students enjoy participating, and do not feel like they are going through a drill or engaging in forced memorization. The goal is to make learning easier and more fun. 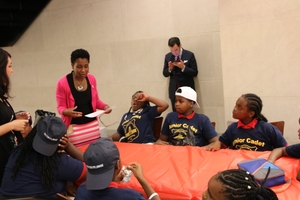 GeoPlunge has been very successful, with one school, for example, using the GeoPlunge system improving its schoolchildren's understanding of US geography an average of 240%! With the success of GeoPlunge, LearningPlunge started thinking that the model used for GeoPlunge could work for History and civics as well.

HistoryPlunge covers over 500 years of US history, from 1492 up to the discovery of the black hole. It also teaches civics, including concepts such as the three branches of government, and the length of the respective terms of the President, Senators, and members of the House of Representatives. The fact cards for each US president even include the number of successful Supreme Court nominations that president made. 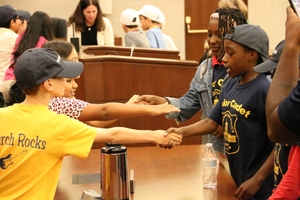 It seems likely that HistoryPlunge will be just as effective as GeoPlunge before it. Alicia Francis, a fourth grade teacher at Ludlow-Taylor Elementary was incredibly impressed with HistoryPlunge. “Adding the game to history is what makes it work.” Students enjoy playing the game, and they retain the information better when they learn it while enjoying themselves as part of a competition.” As Alan said, “The kids learn more because they’re having fun.” However, it is not just the game structure, as the information is presented on the cards in an easily digestable manner. “It's so informative; I use the cards even when not having the students play the game,” says Alicia. Game structure aside, the information presented in HistoryPlunge is easily understood by students, making it an easy way to comprehend complex ideas like civics. 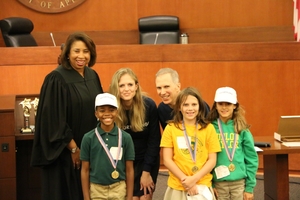 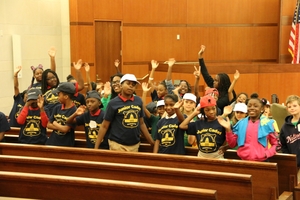 After fatal shooting of 11-year-old, suspects’ past firearms arrests in spotlight